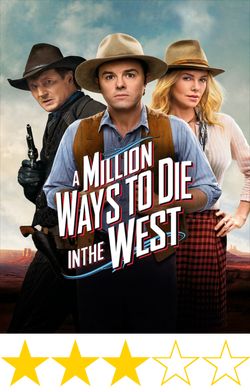 Following the success of his directorial debut, Ted, Seth MacFarlane steps in front of the movie camera for the first time in his new film, A Million Ways to Die in the West. MacFarlane is best known as the creator of the popular animated television series, Family Guy, and he was also the host of the Oscars just two years ago. Now he’s taking the starring role in a film he wrote and directed himself. Here MacFarlane plays a cowardly sheep farmer named Albert who is miserably living in the dangerous Old West. Or rather, the not-so-dangerous Old West. Despite what the title suggests, there’s not a whole lot of dying going on in A Million Ways to Die in the West. You won’t find a whole lot of substance either, but there are a fair amount of laughs if you’re able to tolerate the crude toilet humor and dirty jokes. All in all, MacFarlane does a decent job in this comedy, but his jokes stick too close to his own conventions, and much like life on the frontier, the film can be kind of a drag.

If you’ve ever seen Family Guy, you should feel right at home with the humor in this film. It’s crass, edgy, violent, and full of pop culture references. Although, given that this is an R-rated movie, MacFarlane’s able to push the limits further than usual, and he makes sure to do that by including a lot of raunchy humor and toilet-gags. Oh, and in case you were wondering, yes, male genitals are still the hottest thing in comedy right now. As you’ve no doubt deduced, this is certainly not a film you’d want to take your kids to see. Nor is it for the easily-offended. Though in the film’s defense, it’s not entirely tasteless, and its use of vulgarity isn’t overly frequent. There’s plenty of great slapstick physical comedy and some pretty hilarious dialogue. I laughed more than I thought I would, and was never so disgusted that I wanted to walk out. It’s an entertaining film, it just happens to run a little long and lose momentum down the stretch. Plus the main premise of the film is never all that compelling to begin with. 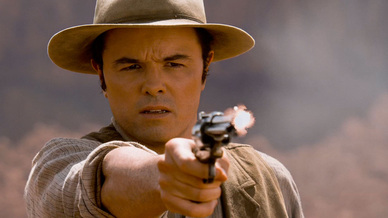 In A Million Ways to Die in the West, MacFarlane’s character Albert is a man entirely self-aware of the time and place he’s living in, as well as the many dangers that come with it. He sheepishly lives his life, terrified by the threat of death that lurks around every corner. When his beloved girlfriend leaves him for a man with a mighty mustache, Albert has to cowboy up to prove his machismo and try to win her back. Luckily for him, he meets a gun-toting woman named Anna who’s happy to help him face his fears and show him the ropes of being a cowboy. Unfortunately however, this new friendship ends up putting Albert right into the crosshairs of Clinch Leatherwood, the deadliest outlaw around.

While MacFarlane does a respectable job in his first foray into acting, his character feels rather uninspired. I couldn’t help but see him as a hodgepodge of various Family Guy characters, having the clumsiness of Peter Griffin, the self-consciousness of Chris Griffin, and the intelligence and charm of Brian. Given that he created that show, perhaps that should be expected, but it just felt like Albert was lacking a unique and consistent identity. He’s a character who can be charming and funny, but he also comes off seeming like a jerk.  All in all, the film has a good cast of actors, with Neil Patrick Harris being the stand-out of the bunch. He plays the pompous, mustached snob, Foy, who steals the heart of Albert’s girlfriend, Louise. Giovanni Ribisi and Sarah Silverman are likable as the flawed, clueless couple who serve as Albert’s close friends, Edward and Ruth. Although their characters stay pretty comfortably within the realm of what you would expect from their respective actors, with Edward being the naïve nice guy, while Silverman’s Ruth is the seemingly-sweet-and-innocent, foul-mouthed hussy. Charlize Theron does a fine job as Albert’s mentor, Anna. She has a strong presence in the film and is fun to watch, but despite her best efforts, the emotional element she brings to the story ends up feeling forced and unconvincing. Though that’s no fault of her own. It’s just hard to imagine her, or anyone, falling head over heels so easily and suddenly for a guy like Albert. Then, of course, there’s Liam Neeson, who is effective in his performance as the intimidating villain, Clinch, but would have benefitted from more screen-time.

A Million Ways to Die in the West proficiently parodies the western film genre, capturing the right atmosphere for the setting and time period. Visually it’s a pleasant film to look at, with good camera-work, well-created sets, and lots of beautiful scenery. This makes it all the more disappointing then that the filmmakers decided to place a visual filter over the entirety of the film to give it a more old-fashioned look. As a result, there is a constant flickering throughout the whole movie, and while not quite seizure-inducing, it certainly is distracting. At times you kind of get used to it and forget about it, but it really stands out in scenes with heavy lighting and most of the movie takes place in broad daylight.  On the audio side of things, the music is appropriately fitting, but little of it is particularly noteworthy. There is a great song about mustaches, accompanied with a well-orchestrated dance number led by Neil Patrick Harris in what is undoubtedly one of the highlights of the film. Additionally the film’s theme song is appropriately fun. The visual effects in the movie, although limited, are done quite well and nicely add to the film’s comedic effect. Although I’m sure I speak for everyone when I say the movie could have done just fine without all of the animated urinating sheep.

I think the film’s greatest flaw is the fact that it’s doing too much as it tries to incorporate all of the main stereotypes of the western genre. It has duels, bar brawls, jailbreaks, horse chases, and even capture by Indians thrown in for good measure. In trying to cover all of the bases, the movie ends up running too long and becomes a little boring and tired. Rather than building up to a climax, the film diverges with some unnecessary scenes, and then concludes with a lackluster ending. It would have been cool to see Clinch and his group of bandits lay siege to the main town, which could have given the filmmakers an opportunity to create a wide variety of deaths, and allow Albert to exercise his newly developed skills before setting up to an ultimate final showdown. Maybe that would be adding to the long list of clichés, but at least it would have given this slow-paced film some much needed adrenaline and would have made it more true to its misleading title. There are also several cameo appearances in the film, and while a couple of them are great conceptually, I don’t think any of them are quite as satisfying as they should be. They end up feeling out of place, like last-second additions that have no purpose other than to acknowledge other films. I can appreciate the attempt but the cameos aren’t particularly funny and they just seem to emphasize how much better those other films are.

Seth MacFarlane’s A Million Ways to Die in the West is good for a few laughs, but just like his character Albert’s long-winded ramblings, it feels like it goes on unreasonably long. It’s still an entertaining film regardless, and if you’re a fan of MacFarlane’s other work, you’ll most likely enjoy his parody of the Old West. The movie has a talented cast, some truly great scenes such as a bar brawl and a memorable dance, as well as plenty of good old-fashioned slapstick, and witty dialogue. If you can handle the occasional gross-out gag, you’ll probably have a good time. Just don’t expect to actually see the many ways people can die In the Old West. The movie doesn’t show many deaths at all, and all the best ones you likely already saw in the trailer.