﻿A  Walk  Among  the  Tombstones  Review 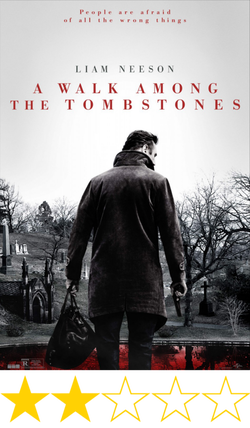 After watching A Walk Among the Tombstones, I literally felt like I was going to puke. This mystery-thriller, based on Lawrence Block’s popular novel, is a gross and grisly foray into the criminal underworld in search of sadistic kidnappers. Director Scott Frank paints a portrait of a dark and twisted 1990s New York City where women are disappearing, only to later show up chopped into pieces. The film is grim without remorse or reason, and if you’re anything like me, you’ll be eager for it to end so you can wash your hands of it entirely. It stars Liam Neeson as an unlicensed private detective named Matthew Scudder who leads an investigation to find the people responsible for these horrific murders. While it may appear from the trailers to be another entry in Neeson’s growing lineup of ass-kicking action-thrillers, it’s actually far from it. A Walk Among the Tombstones plays out more like a brooding, slow-paced horror film. If you’re expecting Taken, then you’re walking right into the wrong movie.

Neeson’s character Matt Scudder is a former alcoholic and an ex-cop turned personal private investigator who works in exchange for favors. Since he’s no longer affiliated with the police, he’s an appealing person to turn to for those who need help but want to keep the cops out of the picture. When a drug dealer’s wife is kidnapped and savagely murdered, he seeks out Scudder for help. What follows is in an investigation into the murder that links up to the murder of another drug dealer’s wife. With the killers still at large, Scudder is determined to catch them before they can strike again.

Being that Scudder is working with criminals to find even worse criminals, the majority of the characters in A Walk Among the Tombstones are quite despicable. In fact, I would argue there’s not a single likeable character in the whole film. Even our protagonist Scudder is a shady person with a corrupt past. It’s hard to care about anyone here except for the poor abducted women, and yet we never get to know any of them. They’re reduced to the point where it’s hard to see them as anything more than the killers’ unlucky victims who have no chance of surviving. We follow Scudder through this twisted investigation not because we care about him, but for their sake of these women, with the hope that our detective hero can put an end to these killers’ unspeakable crimes. The film’s dreadful cast of characters give an incredibly bleak and hopeless outlook on people as a whole.

Liam Neeson gives a suitable performance as Scudder, fitting into the role of a detective quite naturally. As usual, he has a great presence and commands your attention any time he’s on screen. In A Walk Among the Tombstones, he’s not nearly the unstoppable action-hero he has been in his other recent films, but he’s still an intimidating guy you’d be wise not to mess with. He does actually have a couple tense conversations with the killers over the phone that are reminiscent of Taken, but certainly not as memorable.

The killers in the movie happen to be far more appalling than interesting. We don’t ever get to know much about them or their motives. They’re sick, demented people that aren’t given much more depth than being bad for the sake of being bad. However, there's no question that they're believably haunting and deranged. Despite their limited screen time and lack of complexity, their actors put in truly unnerving performances.

The film is well-acted throughout, with a few especially notable performances from supporting characters. Olafur Darri Olafsson is terrific as the creepy cemetery groundskeeper, and Eric Nelsen does a commendable job as the drug addict younger brother of the drug dealer who sought Scudder’s help. There’s also Brian “Astro” Bradley as a homeless teenager named TJ that Scudder befriends, who volunteers himself to be his crime-solving partner. Astro at times lightens up the moody film with his charm, and while he’s truly the only character that offers any sense of hope in the film’s gritty world, I think his character largely feels out of place as an unnecessary inclusion.

Scott Frank effectively creates a dark and sullen atmosphere in his movie that is also visually striking. He turns New York’s underbelly into a stylishly gloomy city where its seedy citizens can run rampant. He demonstrates proficiency behind the camera, building eeriness and suspense. However, he goes too far with the film’s graphic sexual content, which includes rape, torture, and mutilation. While he never gives you a very clear look at these heinous acts, he puts you right there in the moment and lets the camera linger. It’s sadistic, cruel, and very disturbing to watch. In a bizarre directorial decision, he has the 12 steps to recovery from Alcoholics Anonymous narrated over the climax of the film. Considering Scudder regularly attends AA meetings to celebrate his sobriety, I can understand why it was included, but it just doesn’t work and ends up detracting from the film’s most heightened sequences. He also disappointingly finishes the movie on a bad note with a conclusion that is drawn out far too long and which contains a weak, conventional ending that is completely forgettable.

A Walk Among the Tombstones raises more questions than it answers, but in a movie this morbid, maybe it’s best not to know. While the movie excels at being unsettling, it’s never really all that compelling. Filled with plenty of bad dialogue and characters that are hard to relate to and care about, I was yearning for this one to end so I wouldn’t have to endure any more of its vileness. Even with all the disturbing content aside, I would argue that the film is still only average at best. While I’m sure there are plenty of people with a penchant for the macabre that will enjoy the film, I am certainly not one of them and I left the theater feeling completely disturbed by what I had just watched. A Walk Among the Tombstones is a decent detective movie, but your enjoyment of the film may depend on how well you can handle its grimy setting and extreme violence. One thing that I can assure you is that I personally don't have the stomach for it.
5 Minute Movie Guy
9.20.14