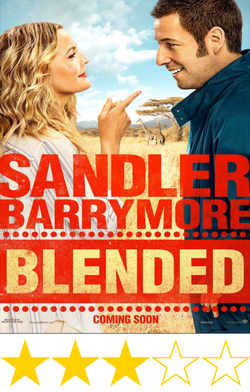 Adam Sandler and Drew Barrymore once again reunite for the romantic comedy Blended. Previously the pair starred together in The Wedding Singer and 50 First Dates, and while the two of them have sincerely compelling chemistry, Blended is unfortunately their worst pairing to-date. The premise of the film revolves around the idea of two single parents falling in love and blending each of their families together as one, à la The Brady Bunch. It’s interesting then that the film itself seems to parallel a predictable process of blending as a family. At first, it’s an unwelcome and uncomfortable experience, but as time goes by it becomes more agreeable, and eventually it becomes acceptable and even enjoyable. The same can be said of Blended, which suffers from a dreadful beginning, but gradually gets better, and by the end becomes a pretty good family-friendly film overall.

Blended face-plants in spectacular fashion right out of the gate as we first meet Jim (Sandler) and Lauren (Barrymore) on a disastrous blind date at Hooters that’s incredibly uncomfortable to watch. Sandler’s character Jim initially comes off appearing remarkably repulsive and immature, while Barrymore’s Lauren is uptight and unlikeable. Things become even more unbearable when the two of them run into each other soon later at a grocery store, in a lifeless scene that is outrageously awkward. There’s also a glaring absence of music throughout the beginning of the movie, which only seems to emphasize the bad dialogue and unpleasant situations. The first half hour of the film is dull, dry, and devoid of any laughs. However, if you can endure Blended’s horrendous beginning, you’ll find that it makes up for its missteps by being a fun movie with a lot of heart. 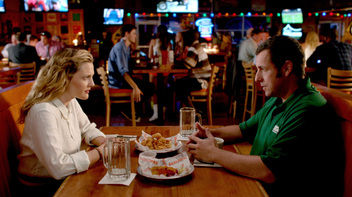 The film finally finds its footing when Jim and Lauren unintentionally find themselves sharing a vacation in Africa. Since both of them struggle to understand and connect with their children, they each jump on an opportunity to reward their families with a trip to Africa, while being entirely unaware that the other is doing the same thing. As a result, Jim and Lauren and their respective children are all forced together, as their trip entails sharing a hotel room at the extravagant Sun City Resort in South Africa, which is hosting a special weekend event for blended families. While this involuntary blending is initially met with great opposition, the two families gradually learn to put aside their differences and begin to care for each other. Furthermore, it turns out that while Lauren and Jim are each somewhat oblivious with raising their own kids, they’re perfectly suited to teach each other’s kids. As a dainty, goody-two-shoes mom, Lauren has difficulty controlling her two wild young boys, but she knows how to care for Jim’s daughters with a much-needed womanly touch. Equally convenient is how sports-obsessed Jim is able to instill discipline and respect in Lauren’s reckless children. Sure, it’s a bit cheesy and predictable, but it works, and does so without feeling completely contrived. 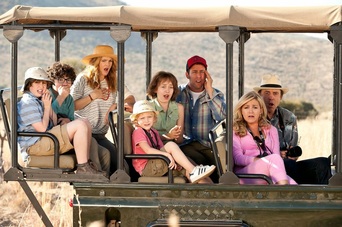 The African setting in Blended is exciting and beautifully represented, although its depiction does seem mildly racist. It just feels a little wrong to have an African resort where rich white people can go on vacation and be catered to by Africans that are portrayed as being relatively primitive. Even Sun City Resort feels less like a resort and more like an amusement park, albeit one that I’d love to visit. It serves as an appealing setting and looks like a whole lot of fun. Perhaps it’s unsurprising then that Adam Sandler recently confessed that he chooses his movies based on where he wants to go on vacation. It may be something of a devious strategy, but he’s managed to make himself a very successful career in doing it. He’s a guy who knows how to have fun, and I think that’s where Blended really shines. Even though it gets started off on the wrong foot, it’s a film that ends up offering a fair amount of laughs, while being a fun movie-going experience.

The performances in Blended are a bit typical, but they’re certainly not bad. Adam Sandler plays his usual good-intentioned-but-misunderstood man-child self. Meanwhile, Drew Barrymore adds a lot of fun to her role as the sweet, geeky mom who’s trying hard to be cool. Terry Crews represents the head of the singing entertainment at the resort who repeatedly appears to interrupt in song. He brings in a good dose of humor and had me really cracking up in one scene. Kevin Nealon seems to be channeling his character from Happy Gilmore in this movie, and is part of another blended couple vacationing in Africa. His blonde trophy girlfriend played by Jessica Lowe is a real stand-out. She does a remarkable job creating laughs as a stereotypical bimbo. Her hot and heavy relationship with Nealon is truly comical, even if slightly sickening. As for the children, their performances are mostly adequate, with Jim’s daughters being the best of the bunch. Disney star Bella Thorne is wonderful as Hilary, who like all of Jim’s children, has unconsciously been raised like a boy, even to the extent of being nicknamed Larry. Additionally, the young Emma Fuhrmann, who plays Jim’s middle daughter, can be surprisingly effective at evoking genuine heart-felt emotion into her scenes. Of course, this wouldn’t be an Adam Sandler without some cameos from his buddies, although the ones in Blended fail to be very funny at all. 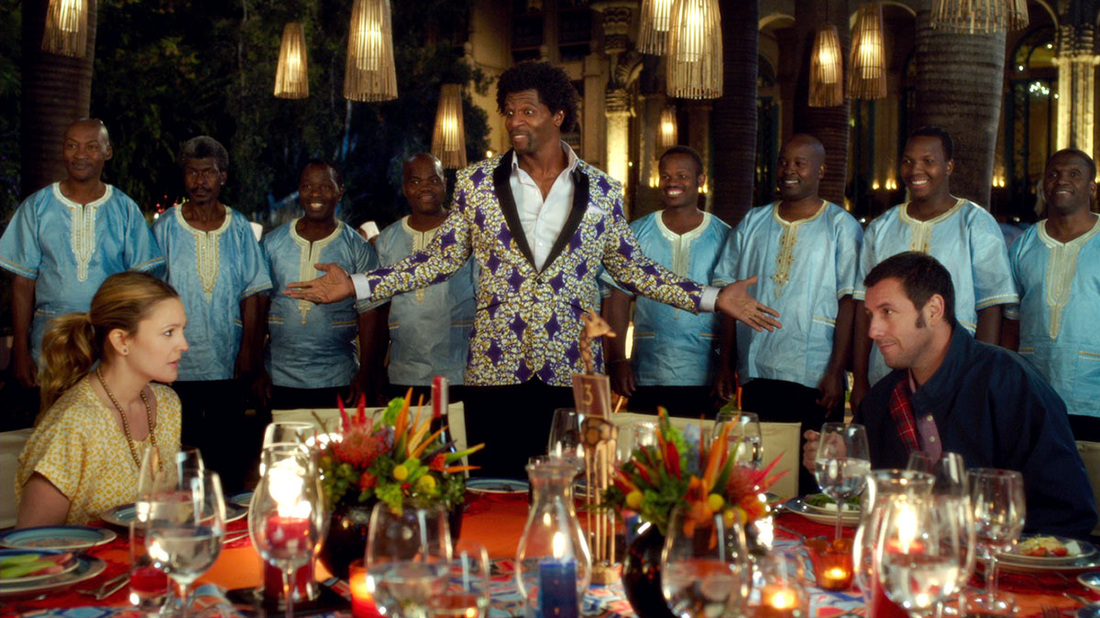 All in all, Blended requires some patience to get through its torturous start, and it gets pretty heavy on the cheesiness later in the film, but it makes a respectable comeback overall. It even manages to touch on aspects of the awful beginning and effectively incorporate them into the grand scheme of things later on. In the end, everything ends up blending together nicely to create a pretty decent comedy, while Adam Sandler and Drew Barrymore prove that they’re still a delightful comedic duo.