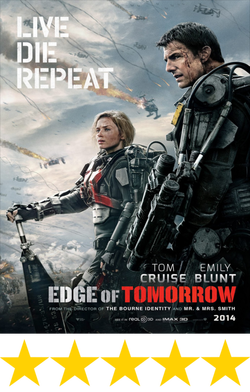 Amidst the yearly barrage of unimaginative action movies, Edge of Tomorrow is a breath of fresh air. It’s smart, funny, and full of action-packed excitement. It is a definitive summer blockbuster and is one of the best action movies of Tom Cruise’s illustrious career. Based on the graphic novel All You Need is Kill by Hiroshi Sakurazaka, Edge of Tomorrow stars Tom Cruise as Major William Cage, who has earned his rank without ever having served a day in combat. All of that quickly comes to a change when he’s put on the frontlines of a war that threatens humanity’s entire existence. Thrust into combat, Cage is cowardly, and also comically unprepared. He fearfully fights for his life, but is quickly killed in the conflict, only to reawaken at the start of the same day. Cage is given another chance at life, with the benefit of having lived the day before and fully remembering it. This is not a gift bestowed upon Tom Cruise by the power of Scientology, nor by Tom Cruise’s near-invincibility in his films, but instead his character Cage inadvertently has tapped into a divine alien power through which he is able to re-spawn from death over and over again. Trapped In this seemingly infinite loop, Cage is able to learn from his mistakes and thereby has the power to single-handedly change the outcome of this war and save the human race from complete annihilation.

The brilliance of Edge of Tomorrow is in its execution. This is a movie that could have easily been tiresome considering it replays the same day continuously on repeat, but it’s handled in a way that makes it entertaining and engaging. It is superbly edited to keep the story moving and the laughs coming. Even as a huge fan of Tom Cruise, I had a marvelous time watching him die off again and again while thoroughly laughing at his expense. What makes it so funny is that Tom is completely in on the joke and is able to generously poke fun at himself. He is perfectly cast in this role, as it allows him to act totally crazy and completely spineless, while gradually transitioning into his usual kick-ass, cool Cruise persona. Edge of Tomorrow feels both exhilarating and original, although it is clearly inspired in part by some other films, such as the comedy classic Groundhog Day, and even The Matrix trilogy. However, having these influences doesn’t take away from the film’s enormous accomplishments. To call it an action sci-fi version of Groundhog Day is only to sell it short. In fact, Edge of Tomorrow might just be the most fun you’ll have at the movies all year.

The conflict in Edge of Tomorrow is an alien invasion that is obliterating humanity. The aliens, known as Mimics, have taken over most of Europe, and with the exception of one keystone battle, have easily routed human military forces. Rita Vrataski, played by Emily Blunt, led that decisive victory at Verdun, earning herself the moniker the “Angel of Verdun” after single-handedly killing hundreds of Mimics in humanity’s first and only victory against the alien species. How was one woman able to massacre these aliens that can lay waste to an armed infantry in minutes? Well, as Cage finds out, she previously had his ability to reset in death, although she no longer possesses that power. Nevertheless, with her knowledge and skill set acquired from her nearly infinite practice, she can transform Cage into Earth’s greatest weapon.

Edge of Tomorrow is a thoroughly impressive package, complete with superb special effects, a heart-pounding musical score, and outstanding performances from its lead characters. Tom Cruise carries the film with veteran expertise, making the film fun and deeply entertaining. Emily Blunt is a powerhouse as Rita, showcasing a heroic toughness with a survivor mentality. I don’t think there are many actresses in Hollywood that could play such a role as convincingly as Blunt does here. Meanwhile, Bill Paxton is as enjoyable to watch as ever. He plays Master Sergeant Farrell, who is Cage’s cocky commanding officer that takes great pleasure in giving him a hard time. As for the aliens in the movie, they look absolutely incredible, not to mention highly original. I think they’re some of the coolest aliens I’ve ever seen, and they’re also far more threatening than your typical movie alien. They’re deathly fast and unpredictable, which makes the film’s action all the more intense. Edge of Tomorrow actually feels very much like a video game, and not just because of the respawning feature. The characters are memorable, the stakes are high, and the action is so engrossing that you feel like you’re an active participant in it. The creativity and combat at work in this film are worthy of belonging in a blockbuster game series. It rarely lets up and is an adrenaline-fueled ride from beginning to end.

I’ll admit that Edge of Tomorrow far-exceeded my expectations. It’s cool in every way imaginable, from the story and the action to the aliens and characters. It will immerse you in its desolate, doomed world that unknowingly rests on the brink of total destruction. Tom Cruise and Emily Blunt are both in top form and make this a movie you won’t want to miss. Edge of Tomorrow is certain to become an instant action classic. One that I wholly look forward to watching again and again and again.

comments powered by Disqus
Powered by