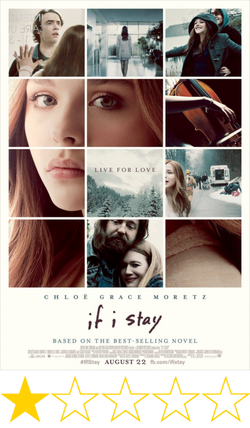 Imagine yourself in a situation where your whole life is turned upside-down in an instant, and nothing will ever be the same again. That’s the troubling position young Mia Hall is faced with in If I Stay, after her and her family are involved in a terrible car accident. Mia wakes up from the crash, only to discover that she’s having some sort of transcendental experience, where she sees her own lifeless body being treated by paramedics. In her ghost-like form, no one is able to see or hear her, leaving her helpless as she watches her tragedy unfold. The devastating crash put her into a comatose state, and as she teeters on the verge of life and death, she’s informed by her nurse that whether or not she lives is entirely predicated on her will to survive. Based on the young adult novel by Gayle Forman, If I Stay asks us if life is still worth living even when all hope appears to be lost. Whether it’s really even worth it to endure life’s cruel hardship and heartache, and to muster the courage to face another day.

Well, if you answered that question with a resounding “yes!”, then like me, you’ll probably find this movie to be pretty darn stupid. Actually, regardless of your opinion on the matter, I think it would be hard for anyone to escape the fact that this movie is pretty darn stupid. However, as much as I find the central question of the movie to be absurd and even offensive, it didn’t detract from my interest in seeing the film. So let’s not make the assumption that I disliked this movie from the get-go, because that’s really just not true. Even though I may disagree with it, I can certainly sympathize with the idea of a teenager who is experiencing a life-shattering trauma and is afraid to continue living on afterward. However, I would personally argue that she hasn’t actually experienced any of that at all. She’s living in an extra dimensional safe-zone. Her horror can’t be real unless she makes it real by returning to life to face it. To look at it another way, couldn’t we say that if she chose death instead, that she never would have experienced the tragedy at all since she was stuck in a coma, and that she would be dead without ever knowing the fate of her family? That’s what I think, though I’ll admit it’s rather complicated as it draws upon unanswerable questions. To be frank, it’s a bogus scenario for a bogus movie that isn’t even worthy of that much thought, and clearly wasn’t ever given that much thought.

Before I digress on this topic, I’d like to look into a few of its implications, because I think it’s sending a terrible and dangerous message to its viewers, particularly the teenagers it’s targeted to. Basically, I believe the film is implying that death is a perfectly okay alternative to facing an undesirable change. I find that very idea to be immoral, irresponsible, and horribly atrocious. “Sorry your dad died, Timmy. If you can’t bear to live another day and want to end it all right here, well that’s okay with us. We understand and we won’t judge!” Are you kidding me? What kind of a message are they trying to send here? “Bad day? Just give up! Things are great here in Heaven! Join us today!” Is that really what they’re trying to tell us? How is anyone possibly okay with this? The film is essentially preaching that killing yourself is a perfectly acceptable option when life gets hard, and I have a really big problem with that. Whether we want to think about it or not, suicide is always an option we have in life, but that doesn’t mean that we should encourage it or try to pretend that it’s ever a favorable opportunity. Mia doesn’t even know what life will be like if she wakes up because she hasn’t lived it yet. Her fears are fully based off of negative assumptions. Yeah, maybe things will be really hard if she comes out of her coma. Maybe she’ll wish she was dead. Or maybe she’ll go through some difficult times, but then maybe things will get better and she’ll pick up the pieces and end up living a wonderful and happy life. Had she actually endured this new life and struggled with thoughts about suicide, I think it would have made for a far more compelling narrative, rather than all of this hypothetic nonsense. Either way, good or bad, life goes on. It’s up to us to adapt to it. Where there is hope, there is always possibility. With all that said, I would still contend that If I Stay’s premise is only the tip of the iceberg of its problems. This supposed tear-jerked failed to stir up any sympathy or sadness from me, and there are a few major reasons why.

First of all, it completely fails as a love story. The film is almost entirely devoid of romance, and has no believable connection between Mia and her boyfriend, Adam. Rather than being a Prince Charming type, Adam’s mostly just a jerk that she shouldn’t be wasting her time with in the first place. Yet the movie tries to make you believe that it’s love, and that this is what all normal relationships are like. It’s a complete crock. Movies like this give girls a false understanding of what love should be, and I find that to be an unforgivable offense. Adam’s the local hot shot rocker who falls for Mia, the talented young cello player who aspires to go to the renowned music school Julliard in New York. Adam manages to win her heart and the two of them start dating. Unfortunately though, their relationship can be pretty unpleasant to watch. Adam’s living the life of a local rock star and is blindly dragging Mia along for the ride, introducing the sweet, young girl to a world of parties, sex, and alcohol. Adam’s utterly oblivious to her disinterest in such a lifestyle and he rarely shows any concern for her feelings anyway. Yet she’s so foolishly committed to him that she follows this path of corruption, all for a guy who only thinks about himself. I thought this was supposed to be a love story, but it’s severely lacking in the love department. Just because Adam occasionally does something nice, we’re supposed to think he’s a good guy and forgive him for the majority of the time when he’s a lousy boyfriend and a loser? Of course, how romantic! Their whole relationship is lifeless and immensely frustrating. If living with him was my alternative to death, believe me, I’d choose death without hesitation.

Had I not seen this film with a friend, it would have been the first movie I’ve ever walked out of. I haven’t hated a movie this much all year. Even with my friend there, I still thought about leaving, then had a good laugh about the film’s title being so perfectly appropriate, as I contemplated to myself whether or not I should go. As much as I wanted to leave, I stuck it out all the way to the end. Then the entire audience ended up laughing at the ending, which goes to show I was far from the only one that thought this movie was a complete joke and waste of time. I had more than a few laughs at the film’s expense, from its dumb and derivative dialogue, to the way Chloe Grace Moretz slightly crosses her eyes whenever she’s upset. While I think I still remained open-minded about the film despite my issues with the story, I really don’t think the film itself was any good, nor does it appear to serve any purpose. Seriously, what’s the point of this movie? To give people hope that you can overcome obstacles in life? To justify suicide? I don’t know. Halfway through the movie, I was so disengaged from it that I was imagining how fun it would be to do cartwheels in the theater. That must be the lesson that I learned from all this. Well, that and to steer clear of crummy musicians, I suppose. While I’ve heard a lot of praise about the film’s soundtrack, I thought Adam’s band was quite horrendous. They do have a moment of redemption when they cover a Smashing Pumpkins song, which may have been the only good moment in this otherwise pitiful movie. I also found the lyrics of that song to be unusually appropriate to my misery when they said, “I’ll rip my eyes out, before I get out.” It’s almost funny that this might have been the only moment of the movie I could actually relate to: the thought of ripping my eyes out before being able to leave.

If I Stay is a movie that disappoints and offends on nearly every conceivable level. The saddest thing about this film is that garbage like this actually exists. Its pro-death agenda is just plain horrible and ill-conceived. It also troubles me greatly to think that teenage girls might watch this film and think that Mia and Adam’s tumultuous relationship is a desirable model of love. Lastly, I’d like to note that the If I Stay novel does have a follow-up book titled Where She Went. Wherever she goes, I sure hope it’s not back to theaters. If I have to sit through another If I Stay movie, I might just give up on life myself.

comments powered by Disqus
Powered by