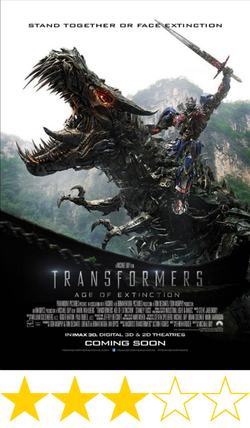 After the events of Transformers: Dark of the Moon, referred to in the film as The Battle of Chicago, the surviving Autobots are being hunted to extinction. The United States government is bent on exterminating all Transformers, good and bad, believing them to be an unwelcome global threat. All the while, the hypocritical government has simultaneously partnered with a wealthy inventor who is trying to create his own superior, man-made variations of Transformers. Furthermore, they’re working with the help of the Transformer bounty hunter Lockdown to search out and annihilate Optimus Prime, the famed leader of the Autobots. Prime has been forced into hiding and has sent out a distress call encouraging his comrades to follow suit. When amateur inventor Cade Yeager inadvertently stumbles upon a disguised Optimus Prime, he helps to repair the damaged Transformer who must reunite with his remaining allies to fight for their right to live.

Before I dive into this review, I think I should inform you that I have not seen any of the previous Transformers movies. I should also note that I’m something of a Transformers hater. Despite pressure from family and friends who have praised the movie series, I have deliberately avoided every single one of the films. I never liked the cartoon as a kid, and while Transformers’ amalgamation of cars and robots may be a dream combination for most guys, I have very little interest in either. However, as a critic, I cannot let my own biases get in the way of giving fair judgment. After having watched Transformers: Age of Extinction, I can thankfully report that the film actually wasn’t half bad. While it’s not going to make a Transformers fan out of me, it was an entertaining, albeit overly-long, movie-going experience.

Age of Extinction is an action-packed ride, filled with the kind of over-the-top entertainment you would expect from a Michael Bay film. While Bay has developed something of a bad rap, there’s no denying his knack for fun and ridiculous action sequences. He’s a man who spares no expense when it comes to explosions and special effects, and this is where Bay is at his best. Love him or hate him, it’s hard to argue with his results as he’s surely one of the most successful directors of all time. However, clocking in at two hours and forty-five minutes, the high-speed action of Age of Extinction is exhausting and becomes tiresome long before the finale. Even when Bay slows things down, he keeps the camera overly busy with particle effects and constant movement. While all of that looks great in IMAX 3D, it feels like an endless visual barrage that is frankly a lot to take in. How many lens flares must a man endure in one movie? I understand the desire to make every shot exciting and visually striking, but I think Bay is trying to tackle too much on camera.

Similarly, Age of Extinction is trying to squeeze too much into its plot, which could almost be broken up into two entirely separate movies. We have the hunt for Optimus Prime and the Transformers by Lockdown and the CIA; Cade Yeager’s discovery of Prime and their ensuing alliance; the love story between Cade’s daughter and her boyfriend; the emergence of the Dinobots; as well as the man-made construction of new Transformers. The result is a fast-paced action movie that is convoluted and far too long. That’s not to say that what is there is bad, though. Awful love story aside, all of the other components of the story are solid and even pretty interesting. Kelsey Grammer puts in a good performance as the head of the CIA who is responsible for the extermination of the Transformers. Similarly, Stanley Tucci is great as Joshua Joyce, the brilliant inventor who is recreating human-controlled Transformers for military use. Yet I can’t help but think that Joyce’s plot would have been perhaps been better to save for a sequel. Sure, it offers a nice parallel between the two inventors and it also creates an opportunity for them to introduce some all-new Transformers, but aren’t the Dinobots enough? There’s so much going on in the film that the eagerly-anticipated Dinobots aren’t given much screen time at all. There is just an unreasonable amount of narratives going on in this movie, to the point where it’s hard to follow, and even harder to stay interested in. Instead of sitting on the edge of your seat during the climactic showdown, you’re probably going to be looking at your watch and wondering how much longer this movie can possibly go on.

While I’m no expert on Transformers, I think the film does an admirable job in bringing the robotic characters to life. Their appearance and animation are both impressive, and they’re typically a pretty fun bunch. I have to admit, though, that I was a bit jarred by the angry and violent demeanor of Optimus Prime. I thought he was supposed to be the good guy everyone looked up to? In Age of Extinction, he clearly has some anger management issues. While he might be the most skilled warrior out there, he sure doesn’t seem like much of a role model. Peter Cullen, the original voice of Optimus Prime, has one again returned to voice the character. John Goodman gives a stand-out voice performance as Hound, in a role he seemed to have a lot of fun with, and Ken Watanabe voices the Samurai-like Transformer known as Drift. All in all, there are a lot of Transformers in the movie, but there is hardly ample time to get to know most of them. I imagine many of them have been introduced in previous films, but for a newcomer like myself, I had a hard time distinguishing between quite a few of them. Then there are the Dinobots, which look awesome, but we’re not given a chance to know much of anything about them. It’s a shame that they’re reduced to feeling like unnecessary bookends to an already overly-crammed movie.

On the human side of things, Mark Wahlberg is enjoyable as the struggling inventor who scavengers through whatever he can to try to create a breakthrough invention. He brings a charming and heroic presence to his role, making him a character we can identify with and root for as he tries to assist the highly-targeted Transformers. T.J. Miller’s Lucas makes for a mildly humorous companion to Cade, although much of the film’s attempts at comedy feel forced and aren’t very funny. Then there’s Nicola Peltz as the skimpily-dressed, rebellious but brainy and innocent, party girl daughter Tessa. She fits right into Bay’s stereotypical sexist female lead who serves as little more than a damsel in distress and eye candy. Still, I don’t know who is worse; Tessa, or her rally car racing boyfriend Shane, played by Jack Reynor. I felt just as frustrated by them as Wahlberg does playing Tessa’s disgruntled and disapproving father. These two lovebirds are an annoying and unwanted addition that only further drag out the plot. While it was at first vaguely amusing to watch Cade freak out as the over-protective father, that shtick ended up getting old real quick. While Wahlberg makes a good new face for the franchise, I hope to God that he comes alone for the next one.

Transformers: Age of Extinction is a fun summer movie. Director Michael Bay sticks to his usual mode of operation with ridiculous action sequences, top of the line special effects, and a whole lot of explosions. If you’re looking for a movie with more flash than substance, Age of Extinction should be right up your alley. It’s jam-packed and overly ambitious, stretching the run time far longer than it ever should, but if offers plenty of dumb, fun entertainment. Transformers fans should be pleased, though the series still has yet to make a fan out of me.
5 Minute Movie Guy
9.22.14